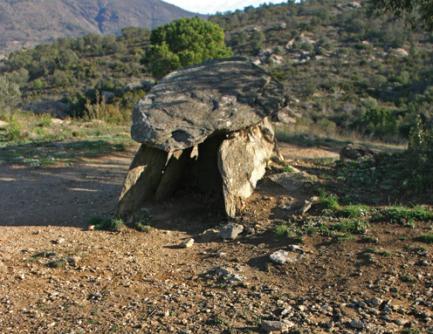 The Albera Range Natural Park has a lot of things to discover. The Albera boasts a rich heritage of Romanesque architecture, the style that prevailed during the high middle Ages when settlements in the area were consolidated. One of the greatest concentrations of megalithic monuments in Catalonia, dating back to the period between the middle Neolithic and Chalcolithic is located on the southern slopes of the range.
First you could visit the Albera tortoise centre. This centre is located beside the chapel of” Mare de Déu del Camp” (Garriguella). It was set up to promote the reproduction and conservation of the Mediterranean tortoise, a species whose numbers have declined alarmingly in recent years.
You can walk through the valley and visit the remains of the Monastery of Sant Quirze de Colera and also the church of Santa Maria de Colera. It is a Benedictine monastery documented as far back as the 10th century.
In Rabós, towards Espolla, there is the information point of the Albera range. In Rabós d'Empordà you will find megalithic monuments.
The landscape is also very interesting. You will enjoy finding the megalithic tombs: la Cabana, Arqueta, la Font del Roure or the Menhir of Castellar.
As a curiosity, there are still megalithic monuments not documented because the extension is considerable.
Sant Climent is a small village but there is situated the military base that receives the same name as the village. Between rocks and vegetation are the dolmen of the Gutina and the menhir of la Murtra o Pedra Gentil.
From here we can reach Capmany where there is a path which goes to Estanys de la Jonquera. It is an area of small lakes and ponds at the southern tip of the borough of La Jonquera, adjacent to Cantallops and Capmany. The Estany Gros (3.5 ha) is the only lake which contains water all year round. During the migration season, many birds find rest and food here, especially those which have to fly northwards across the Pyrenees in the face of the powerful north wind, the tramontane. The presence of water throughout the year also makes this area a favourite breeding spot for many animal species, particularly amphibeans. The area is protected under the Pla General d'Urbanisme of la Jonquera and under the Pla d'Espais d'Interès Natural (PEIN), approved by decree 328 on 14 December 1992. As follows, a list of megalithic monuments in Capmany:                             *”Dolmen del Quer Afumat” * “Menhir del Quer Afumat” * “Dolmen del Mirgoler” * “Pedra dels Sacrificis”.
Roses also possesses one of the most complete and impressive megalithic itineraries of the Costa Brava. Three large dolmens conserve the memory of the area's first settlers: the Creu d'en Cobertella (3000-2700 BC), the Llit de la Generala (3200 BC) and the Cap de l'Home. The Creu d'en Cobertella, the largest dolmen in Catalonia, dates from the Neolithic and was declared a historic-artistic monument in 1964. It has a large gallery covered by a four-ton slab which measures 5.20 m long, 2.45 m wide and 2.14 high. The tour around the origins of the town also reveals the funeral chamber of the Casa Cremada and its two menhirs (4th-3rd millennia BC), and the cave-dolmen of the Rec de la Cuana, from 2500 BC.
Very close from Roses, in Palau-Saverdera you will also find a dolmen. The Dolmen called “Muntanya de Caselles”. It is situated in the path towards “Sant Onofre”(small chapel in the middle of the mountain).

In the following link you will find a list of megalithic monuments in the region of Alt Empordà.:

Thank you for subscribing !

You will shortly receive our news by e-mail.

How to get to AquaBrava ?